woof woof! Hunter here again. If you’re friends with mommy on Instagram, then you already know. We have a new toy!! Papa bought a GoPro from Uncle Simon, and boy are we having fun with it. Luckily, Uncle Alan had mommy for secret Santa and got her GoPro accessories. #SELFIESTICK time! Here are some pictures from yesterday’s photo shoot(s). 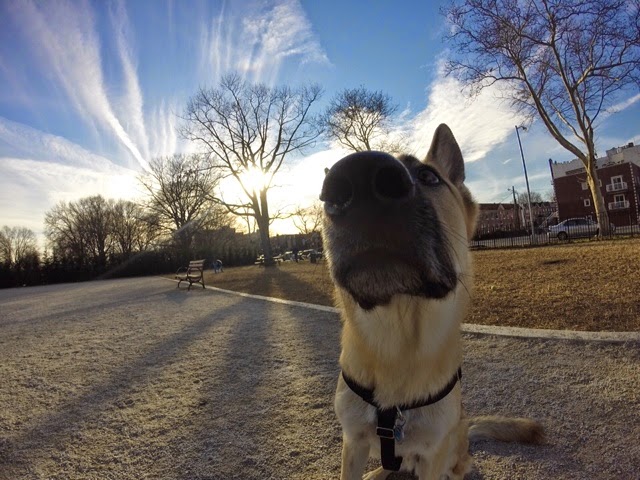 We are quite obsessed with the photo quality of the pictures. Mommy is particularly obsessed with up close and personal pics of my head. Trust me. The pictures are deceiving. My head really isn’t that big. 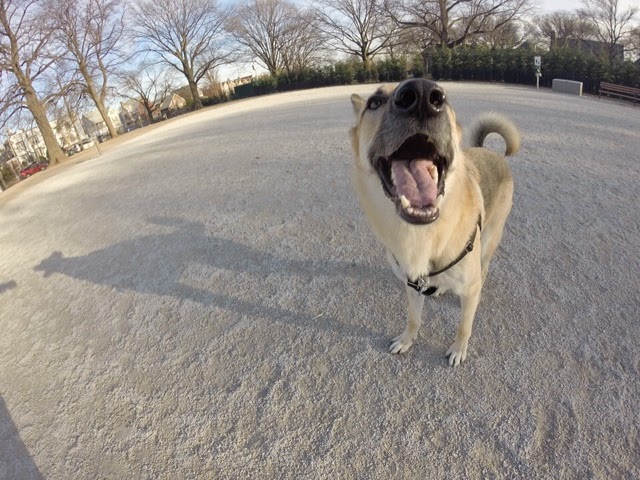 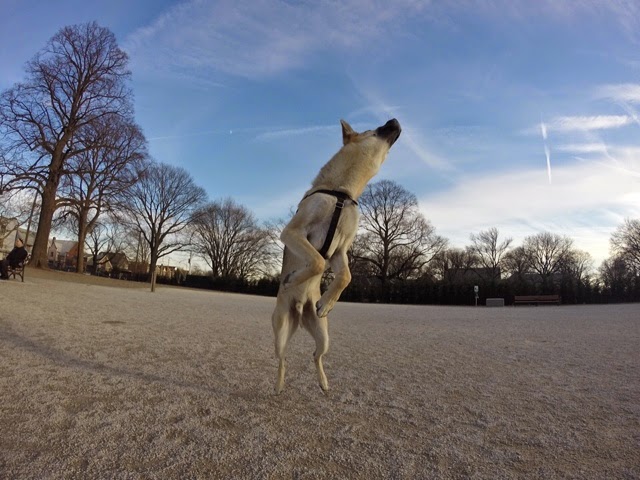 Action shot! What else would we use the GoPro for? 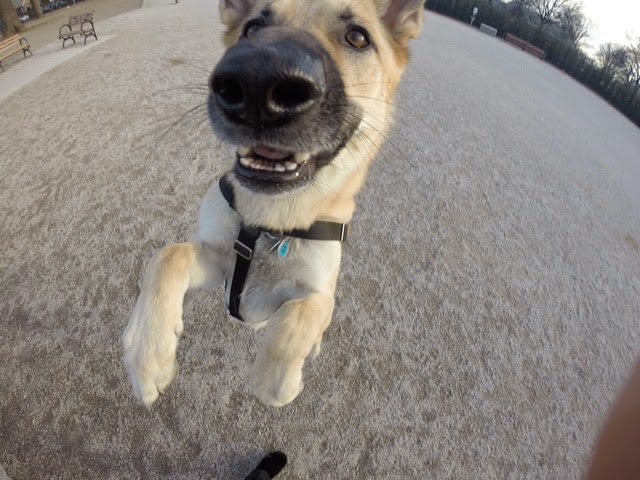 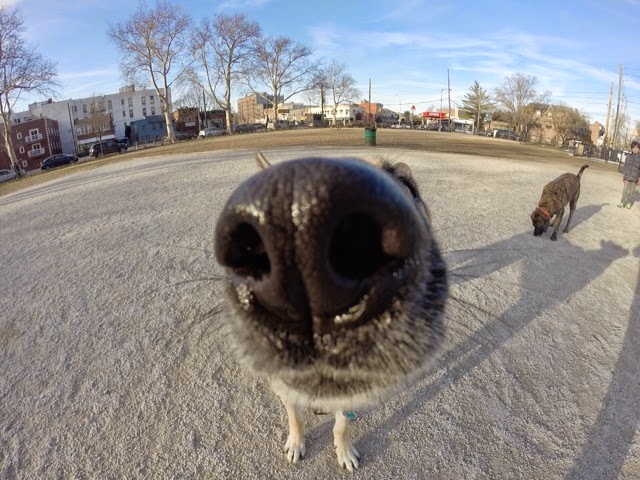 Get this thing outta my face already! 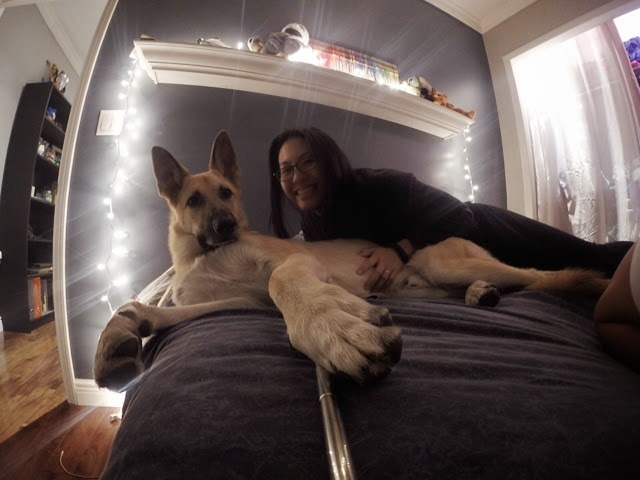 Then at night, I caved in and gave the selfie stick a go too. I tried my best to angle my head so that I captured my good side. What do you think? How did I do? 🙂 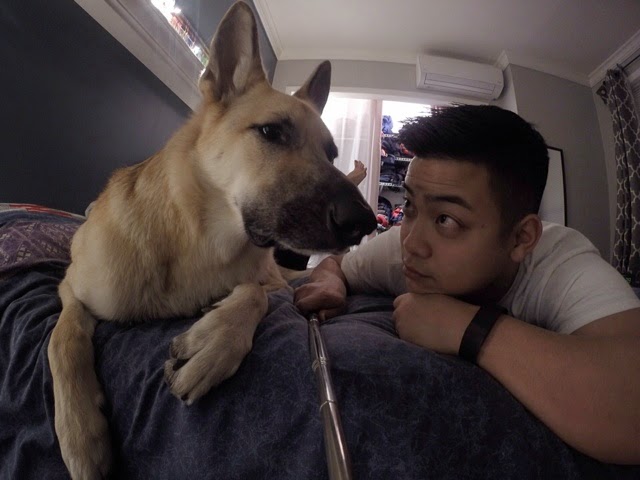 Then papa wanted a turn so being a good boy, I passed on the torch. Peep someone’s stinky foot in the background.
We can’t wait to take more pictures with our new toy! Unfortunately, mommy’s harness does not work well with my body. In other words.. it does not work on me at all! That means we won’t be showing any videos from my perspective anytime soon. I will wait until Lunar New Year so that I can use my lucky money and buy my cheap parents a GoPro pet harness for me. 🙂 You’re welcome in advance mommy. Hunter out!
December 29, 2014January 8, 2015Leave a comment

woof woof! Hunter here. I hope you human folks enjoyed the holidays with friends (2-legged and 4-legged alike) and family! I know I did! Mommy’s off until after New Year so it’s just mommy and me time going forward! Anywoofs, so the other night, mommy took my to the field near our home and from afar I spotted it! The branch of ALL branches! JACKPOT! 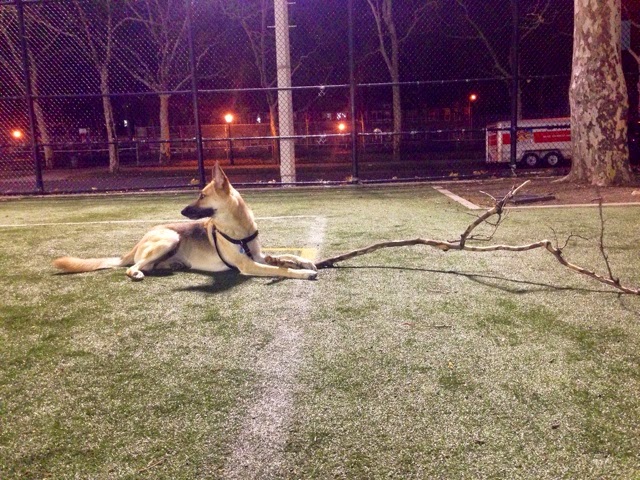 Now do you see what I’m talking about? Look at how gigantic this gorgeous thing is! It’s so big, it’s like a mini-tree! 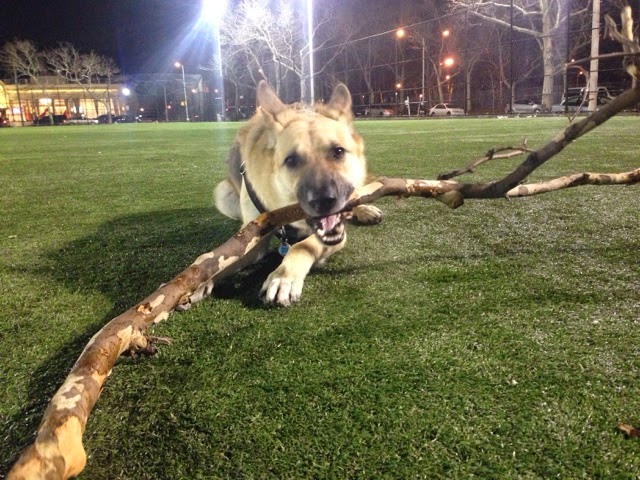 This is life. Mommy tried to throw the mini-tree across the field for me to fetch… let’s just say.. her tosses didn’t go very far. It’s obvious she needs to work harder in the gym. So basically she gave up and just sat down while I gnawed on my tree. 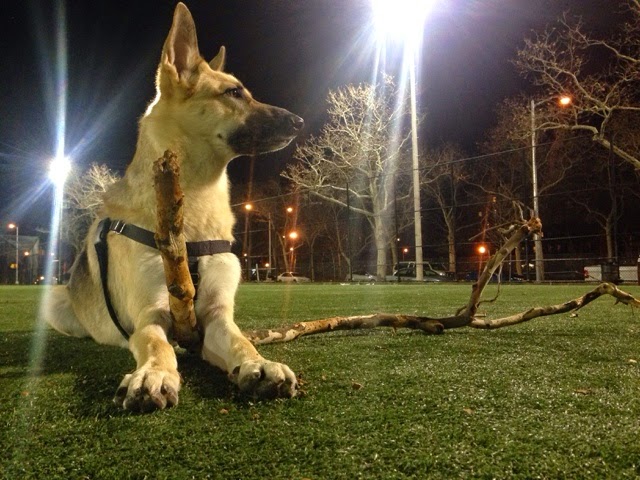 Protecting what’s mine!
Remember that we are switching blog sites after the new year! We will keep you posted! Hunter out!
December 26, 2014January 8, 2015Leave a comment 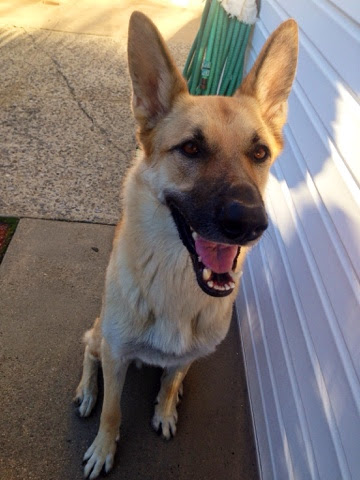 This is what I’d like to call the after-picture. See the innocence? The happiness? He’s so stinkin’ cute. I bet that’s what you all are thinking right now. NO. Let me explain myself..
Hunter’s sensitive stomach saga continues. If you’ve been following along on our blog, you would know that this happened last month. The boy gave us another wonderful surprise early this morning. Only this time, we didn’t get the luxury of a verbal warning, aka whining. I knew something was wrong when I woke in the middle of the night to find him on the opposite side of the room. It was strange because he is never on that side of the room. Ever. He refused to go back to his bed located on the other side even when I asked him to and opted to sleep on the floor. Fine, I thought to myself. Sleep on the floor. Ain’t nobody got time to argue with a dog in the middle of the night. I went back to sleep… until his heavy panting woke me again around 6:30 AM. He was still on the other side of the bedroom. I assumed his panting was from the heat so I went to the kitchen to refill his water bowl. He followed me half way but jetted back into the room, to the opposite side again.
And when I followed him.. that’s when it happened. I felt it in between my toes. It was warm and mushy. Shortly afterwards, the smell hit me like a brick wall. I felt my nose hair singe, and I thought to myself, “CRAP!” (No pun intended) I didn’t want to, but I forced myself to look down. I screamed for Selton to turn on the lights… which he did quite slowly being that he was in the middle of a lovely dream (so he said). Yup. Hunter had did it again. His stomach and body won. He couldn’t hold it.. but I’m sure he must have tried with all his might, right? I mean.. he wouldn’t put us through this saga on purpose… would he? As a team, our response time was quick. We had learned from the first time, and the two of sprung into action like a SWAT team on a serious mission. I immediately grabbed cleaning products and ran back to the crime scene. Selton had thrown his jacket and sweats on and was in the middle of putting on Hunter’s leash. Was it fast enough? No, because Hunter managed to unload his second round in the living room before Selton could even put on his socks. The two of them left and I was left alone to clean.. again. In the midst of cleaning, I ran out of newspaper. Crap again. Luckily Christmas was yesterday and being super resourceful, I managed to effectively use old wrapping paper and tissue paper. I cleaned the areas up several times with Lysol wipes, Clorox, paper towel, our Swifter wiper and PINE SOL, which we recently added to our cleaning weaponry. Febreeze was a must, and you can bet your savings that I turned our air freshener on to MAX sprays. Once Selton and the boy returned from their walk, we opened all our windows, and abandoned our home for a few hours. Oh… and for Hunter? After a few more bouts of diarrhea and vomiting, the knucklehead was back to his normal self. Smiling and running around. As if NOTHING happened. Typical Hunter. Well, until next time. Come back around the same time next month, and you’ll probably find yourself reading another poo incident. Wish us me luck.